Our Chef aka “Pit Master”

Lloyd is a well-seasoned chef and restaurateur, having competed both nationally and internationally. His passion for cooking reflects in the flavour of his food and respect for fresh ingredients. His latest craving to master is campfire BBQ in Regina and areas. You’ll see him in local markets or in Lumsden picking up the freshest products possible. His research and experience have led him to building his custom BBQ trailer. It was custom designed by Lloyd and a pit master in Nashville. Recently returning from BBQ Paradise (Texas that is), Campfire Grill is excited to offer our new BBQ catering menus. He can customize any menu to fit your function. He doesn’t bite! Just ask! 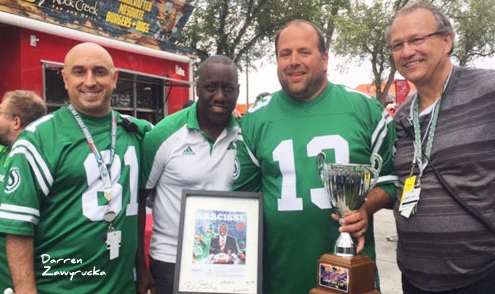 Darren has been in the restaurant business since he was 15 years old… not to date him – but that’s a really really long time ago. He started in the kitchen as a dishwasher. Later he spent 8 years with the Keg Steakhouse. His roles brought him from serving to kitchen manager, and after 3 years he became the general manager. For the past 8 years Darren has been the Director of Operations for the Rock Creek Tap and Grill Franchise. Customer service is where Darren thrives. He has international experience both in and out of the kitchen, and has worked on cruise ships in casino operations and guest services for 5 years. This dude has a serious love of travel having been to over 60 countries. He has sourced out the best food around the Globe but admits to not being as brave as the late Anthony Bourdain. Darren is a proud foodie, who calls Regina his home with his wonderful wife and two children. You may spot him in the rink, cheering on his son’s hockey team or proudly sporting a cheer dad shirt nervously watching his daughter (a flyer) at various cheerleading competitions.